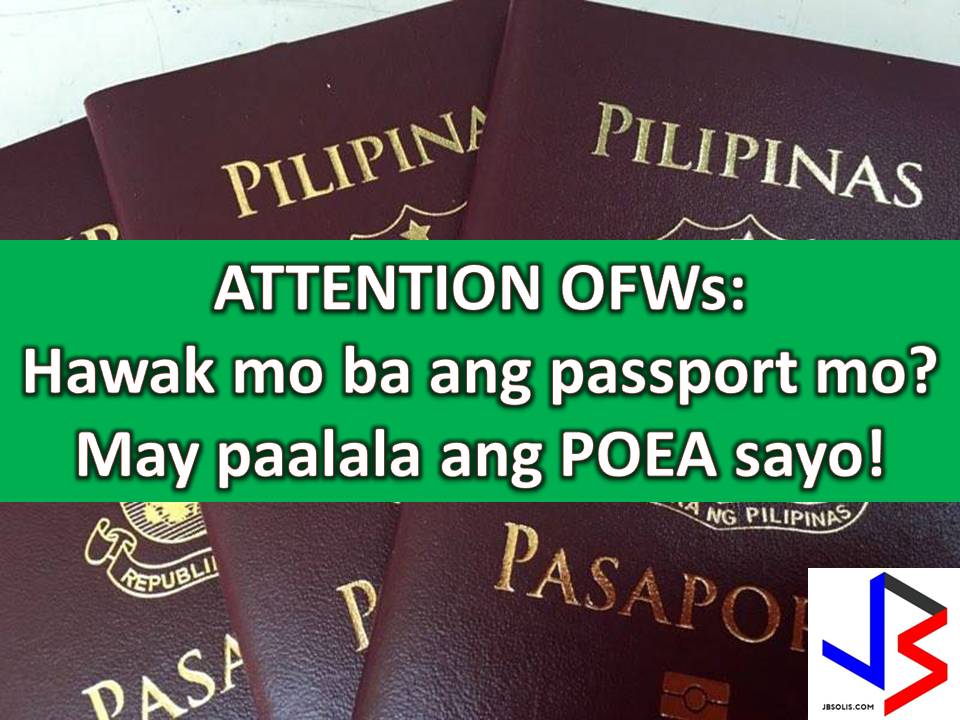 (Watch:Faster processing of passport documents for OFW, starts in October)

“Utang” is everywhere. Even Overseas Filipino Workers (OFWs) abroad are not exempted to this.

But the Philippine Overseas Employment Administration (POEA) reminded OFWs not to use their passport as collateral for loans or “utang”.

It is because under the Foreign Service Circular No. 214-99 dated August 19, 1999, passport used as collateral are automatically canceled “upon notice by the passport holders.”

“The cancellation of the said passports, therefore, renders the documents invalid for purpose of guaranteeing payment of loans/obligations,” it added.

The Consulate General of the Philippines added that passports must not be used as guarantees because they are government property.

In Hong Kong, a Filipina domestic helper ended up overstaying her visa for five days and was forced to go home because she used her passport as collateral for a loan in 2015.

According to the report, the OFW’s contract was terminated by her employer and should have left Hong Kong within two weeks but could not because her passport is not with her and accordingly she used it as a collateral for the loan.

Because of this practice, POEA said, many Filipinos overstayed their visas and unable to go home during emergencies.

It is said that if OFWs misused their passport by using it as loan collateral, they will not receive a help from the Philippine Embassy.

Another domestic helper, Gina, not her real name, ask the Assistance to National (ATN) in Philippine Consulate General in Hong Kong to seek help in recovering her passport held by lenders.

The ATN refused her request and reiterate that passport should never use as collaterals.

(Watch:Keeping of OFW’s passports by foreign employers is illegal)

According to the report, Gina use her passport as loan collateral for HK$15,000 so that she can help for the placement fee of her two friends who moved to Canada.

According to Vice Consul Alex Vallespin, head of ATN in Hong Kong, debt problem has become a common issue but OFW should not use their passport as collateral.

He reiterated that passport issues to Filipinos are the property of the Philippine government and OFWs should never dishonor it.