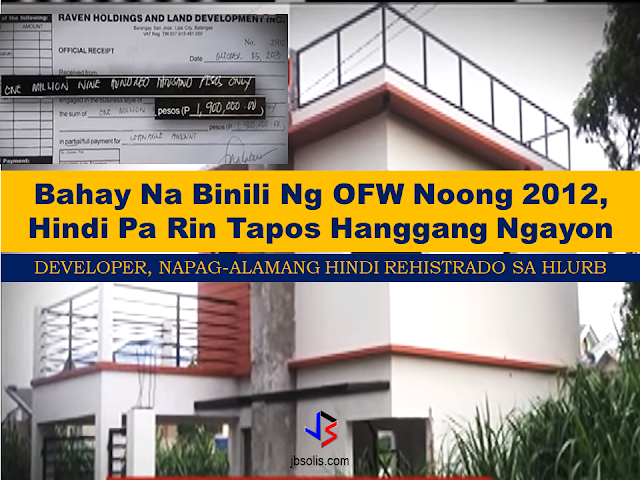 What would you feel if you bought a house and lot with your hard-earned money with high hopes that it will be delivered on time but the developer failed?

An OFW working in Qatar bought a house and lot in Lipa, Batangas under Raven Development and Holdings but to his dismay, the house is still not finish ans still without title after almost seven years since it has been bought.

The OFWs brother, Noel has been negotiating with Raven Holdings and Land Development, Inc. to finish the construction of the said house. The OFW has already paid around almost P3 Million for the house in a house situated at Lipa, Batangas.

A complaint regarding the matter was reported to Housing and Land Use Regulatory Board (HLURB) and they’ve found out that Raven Holdings is not connected to their office. The developer also refused to issue any statement because the negotiations is still ongoing according the their lawyers,

HLURB warns the public to be vigilant and make sure that the public is buying and transacting only with legitimate developers and brokers that offers real estate property.Source: ABS-CBN