Many  Overseas Filipino Workers (OFWs), especially the household service workers (HSW) doesn’t know or heard about a program named Single Entry Approach (SEnA) which can help them make settlement claims from their employer. If so, many OFWs can enjoy the benefit especially those whose contracts were illegally terminated.

On January 19, a social media post from OWWA Region 2 showed two OFWs who were able to claim cash settlements from their agencies. Vicenta Fuggan, an HSW from Kuwait, got her cash settlement amounting to P10,000 for contract violation, maltreatment, and payment of the portion of her unexpired contract.

Another HSW from Saudi Arabia, Lanie Corpuz, also got a cash settlement for her unpaid salary and the unexpired portion of her contract amounting to P22,000. 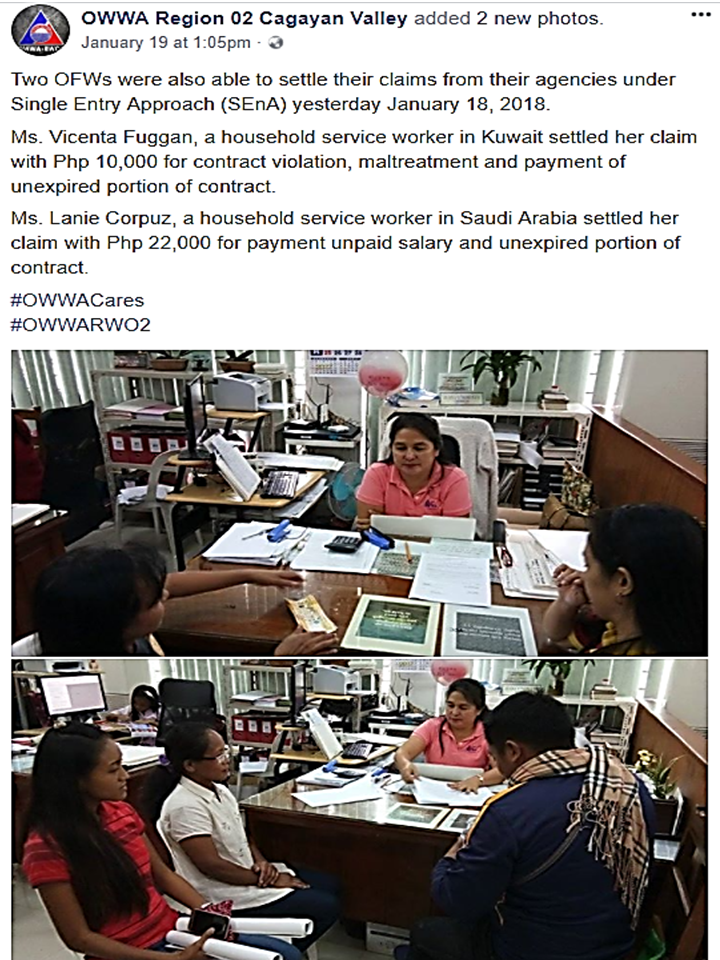 Four days earlier, four OFWs were able to settle their claims from their agencies also through SEnA.

Ms. Josefina Medina and Ms. Rose Ann Medina settled their claims with Php 40,000 each as a refund for their placement fees and as a contact violation settlement. They were both caretakers in Taiwan.

Ms. Nancy Gabriel settled her claim with Php 20,000 as a refund of the plane ticket, payment of the unexpired portion of the contract and being overworked. She was a household service worker in Saudi Arabia.

Likewise, Ms. Analyn Lammawen settled her claim with Php 10,000 for her unpaid salary, contract violation and as payment of salary differential. She was a household service worker in Jordan. 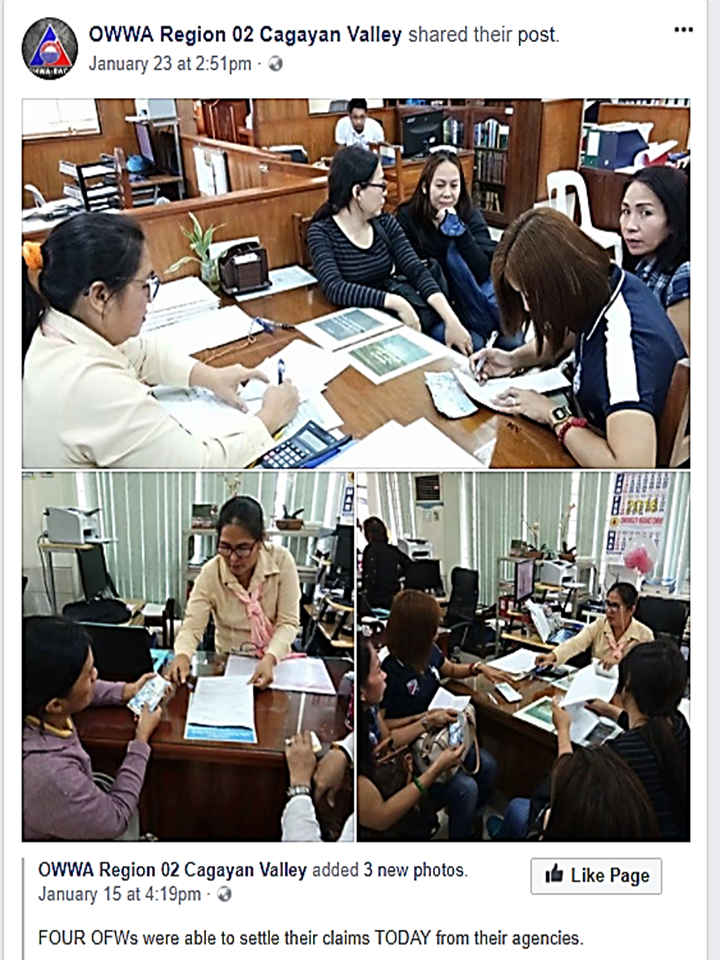 The money claims may not be that big but it could still help the aggrieved OFWs in some ways. What is important is that the OFWs could somehow find help from the government such as OWWA, DOLE, POEA,  and other government entities concerning OFWs.

What Is SEnA and how does it work?

Single Entry Approach (SEnA) is an administrative approach to provide a speedy, impartial, inexpensive, and accessible settlement procedure of all labor issues or conflicts to prevent them from ripening into full-blown disputes or actual labor cases.

It was first introduced through Department Order 107-10 and later institutionalized through the enactment of Republic Act 10396 in 2013 providing for 30-day mandatory conciliation-mediation for issues arising from labor and employment (i.e., governed by employee-employer relations). As a form of conciliation-mediation intervention, the main objective is to effect an amicable settlement of the dispute among the differing parties wherein a neutral party, the SEnA Desk Officer (SEADO), assists the parties by giving advice, or offering solutions and alternatives to the problems.

The SEnA implementing offices include the following:

What are the cases that can lead to cash settlement claims under SEnA?

Labor dispute issues that may be settled through SEnA include, among others:

OFWs can visit OWWA regional offices at their locality and file a request for assistance (RFA). SEnA sets the period for 30 calendar days of conciliation-mediation. Settlement agreements reached are final and immediately executory. It is binding on all DOLE offices and attached agencies except when these are found to be contrary to law, morals, public order, and public policy.