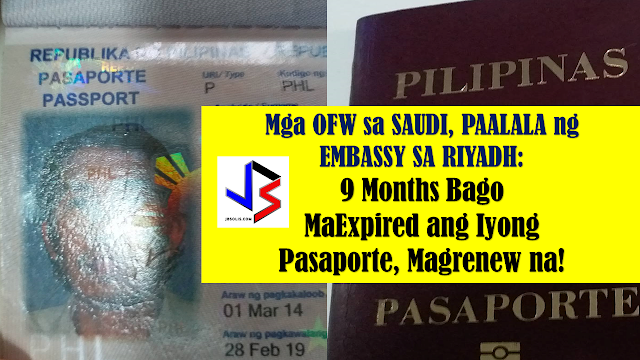 Many countries, especially in the Middle East, require your passport to be valid for 6 months before your departure date. Example, if you are travelling back to the Philippines in December 2017, your passport should be valid at least April 2018. If your passport is expiring earlier than that, chances are, you won’t be able to leave Saudi Arabia because immigration will not allow you to leave Saudi Arabia especially if you have re-entry visa, or airlines will refuse you to board your flight.

According to an advisory:

“The Philippine Embassy in Riyadh, Kingdom of Saudi Arabia reminds the Filipino community in Saudi Arabia to check the validity of their passports and have it renewed if its validity is 9 months or less.

As a matter of policy, the Embassy discourages the extension of ePassports due to the fact that some foreign governments do not recognize the extension stamp, opting to stick to the validity date as stored in the chip of the ePassport.

To avoid any inconvenience, Filipinos in Saudi Arabia who wish to renew their passports should obtain an appointment by accessing the Embassy’s official website at, www.riyadhpe.dfa.gov.ph.”

This is probably because of the delayed or backlog in the printing of new e-passport which until now, the DFA has yet to resolve. 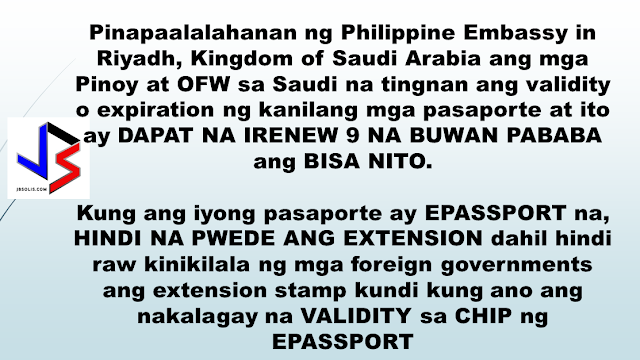