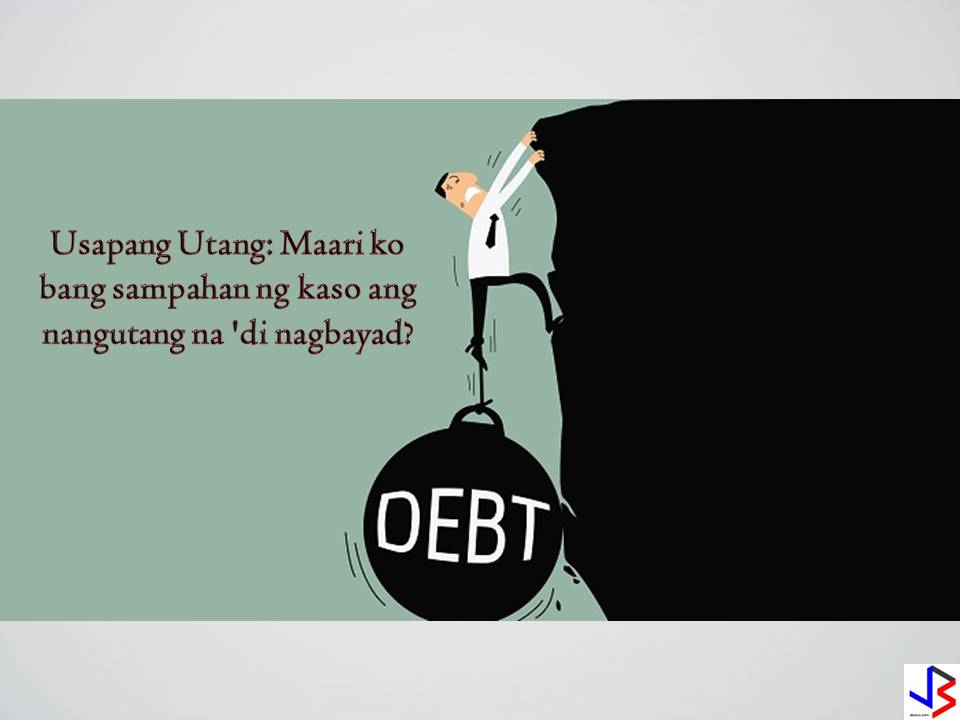 CAN A LENDER FORCIBLY OR VIOLENTLY ASKED DEBTOR TO PAY?
Violent ways of collecting debt punishable by law according to Public Attorney’s Chief Persida Acosta

“There is no question that that man who lent you money has the right to oblige you to pay, considering that the loan he extended to you is due and demandable. There are ways allowed by law on how this man can collect the loan from you. One is to demand payment in person or through a letter. Another is by bringing the matter before the Katarungang Pambarangay, in case both of you live in the same barangay (village), city or municipality. Lastly, he may file a collection case against you in court.

Revised Penal Code of the Philippines, to wit:

“Art. 287. Light coercions. — Any person who, by means of violence, shall seize anything belonging to his debtor for the purpose of applying the same to the payment of the debt, shall suffer the penalty of arresto mayor in its minimum period and a fine equivalent to the value of the thing, but in no case less than 75 pesos.”

Lender has 10 years to collect debt

The New Civil Code of the Philippines gives light to this, to wit:

“Art. 1144. The following actions must be brought within 10 years from the time the right of action accrues:

(1) Upon a written contract;

(2) Upon an obligation created by law;

According to the above law, you have 10 years within which to collect the loan from your neighbor, to be reckoned with, from the time he defaulted.

There are cases that take time to conclude especially those that are exceptional or complex, owing to the nature of the action itself, or on the surrounding circumstances of the case. But, there are also cases that are promptly heard and speedily resolved.

Pursuant to its constitutional power to promulgate rules of procedure in court, the Supreme Court issues rules and regulations aimed at providing a simplified and inexpensive procedure for the speedy disposition of cases. One of the rules issued by the Supreme Court, which applies to your case, is the Revised Rule on Summary Procedure.

The rationale behind the Philippine Rule of Procedure for Small Claims Cases as Amended (SC En Banc Resolution dated October 27, 2009 in A.M. No. 08-8-7-SC) is to make claims for P100,000.00 or less be heard in a quick and inexpensive manner through a procedure that is simple and informal. It is informal as only the parties appear at the hearing. Lawyers are not allowed to appear. The parties themselves will present their case speaking even in their own dialect. The Rule encourages parties to settle their differences with the court’s assistance. But even if the Rule of Procedure for Small Claims Cases is simple, laymen could not easily digest the wordings of the rule, thus, defeating its very purpose. As a court worker assisting in the filing of Small Claims Cases, this blog aims to shed light to some basic questions raised about this rule.

What is the “Small Claims Rule”?

The Small Claims Rule is a special procedure where money claims for P100,000.00 or less, exclusive of interest and cost are heard. The process is quick and inexpensive. The procedure is simple and informal.

Who can file Small Claims Cases?

Any person whether an individual, corporation, partnership, limited liability partnership, association, or other juridical entity endowed with personality with law.

What are the cases covered under the Small Claims Rule?

The Rule applies to all action which are: (a) purely civil in nature where the claim or relief prayed for by the plaintiff is solely for payment or reimbursement of sum of money, and (b) the civil aspect of criminal actions, either filed before the institution of the criminal action, or reserved upon the filing of the criminal action in court, pursuant to Rule 111 of the Revised Rules Of Criminal Procedure.

These claims or demands may be:

(a) For money owed under the following:

(b) For damages arising from any of the following:

(c) The enforcement of a barangay amicable settlement or an arbitration award involving a money claim covered by this Rule pursuant to Sec. 417 of Republic Act 7160, otherwise known as the Local Government Code of 1991.

Where to file Small Claims Cases?

How is Small Claims Action commenced?

A small claims action is commenced by filing with the court an accomplished and verified Statement of Claim (Form 1-SCC) in duplicate, accompanied by a Certification of Non-forum Shopping (Form 1-A, SCC), and two (2) duly certified photocopies of the actionable documents/subject of the claim, as well as the affidavits of witnesses and other evidence to support the claim.

What to prepare before filing an accomplished and verified Statement of Claim?

The plaintiff should gather all documents and evidence pertinent to the claim. Examples:

(b.) Latest Demand Letter (if any), its proof of service and proof or receipt

(c.) Certificate to File Action from the barangay, if necessary

(e.) Secretary’s Certificate of Board Resolution authorizing you to file the case, if you are representing a corporation, partnership, cooperative or association

Is there a filing fee for Small Claims Cases?

Yes. The plaintiff shall pay the docket and other legal fees prescribed under Rule 141 of the Revised Rules of Court, unless allowed to litigate as an indigent.

What are the actions of the Court after a Small Claims Case had been filed?

The Court has two (2) actions:

(a.) Dismissal of the Claim. – After the court determines that the case falls under the Rule of Procedure for Small Claims Cases, it may, from an examination of the allegations of the Statement of Claim and such evidence attached thereto, by itself, dismiss the case outright on any of the grounds apparent from the Claim for the dismissal of a civil action.

(b.) Summons and Notice of Hearing. – If no ground for dismissal is found, the court shall forthwith issue Summons on the day of receipt of the Statement of Claim, directing the defendant to submit a verified Response.

The court shall also issue a Notice to both parties, directing them to appear before it on a specific date and time for hearing, with a warning that no unjustified postponement shall be allowed.

When to file a Response in Small Claim Cases?

The defendant shall file with the court and serve on the plaintiff a duly accomplished and verified Response with a non-extendible period of ten (10) days from receipt of summons.

How to make a Response?

A Response form (Form 3-SCC) will be served to the defendant. The defendant will simply fill up the form. The Response shall be accompanied by certified photocopies of documents, as well as affidavits of witnesses and other evidence in support thereof.

What is the effect of failure to file a Response?

Should the defendant fail to file his Response within the required period, and likewise fail to appear at the date set for hearing the court shall render judgment on the same day, as may be warranted by the facts.

Should the defendant fail to file his response within the required period but appears at the date set for hearing, the court shall ascertain what defense he has to offer and proceed to hear, mediate or adjudicate the case on the same day, as may be warranted by the facts.

Is a representative allowed in Small Claims Cases?

Appearance through a representative is allowed but must be for a valid cause. The representative of an individual-party must not be a lawyer, and must be related to or next-of-kin of the individual party. Juridical entities shall not be represented by a lawyer in any capacity.

The representative must be authorized under a special power of attorney to enter into an amicable settlement of the dispute and to enter into stipulations or admissions of facts and of documentary exhibits.

What is the effect of non-appearance of parties?

Failure of the plaintiff to appear shall be cause for the dismissal of the claim without prejudice. The defendant who appears shall be entitled to judgment on a permissive counterclaim.

Failure of the defendant to appear shall have the same effect as failure to file a Response. This shall not apply where one or two or more defendant who are sued under a common cause of action and have pleaded a common defense appears at the hearing.

Failure of both parties to appear shall cause the dismissal with prejudice of both the claim and counterclaim.

A request for postponement of a hearing may be granted only upon proof of the physical inability of the party to appear before the court on the scheduled date and time. A party may avail of only one (1) postponement.

What will happen during the hearing of Small Claims Cases?

At the hearing, the judge shall exert efforts to bring the parties to an amicable settlement of their dispute. Any settlement or resolution of the dispute shall be reduced into writing, signed by the parties and submitted to the court for approval.

What will happen if there is no settlement?

If efforts at settlement fail, the hearing shall proceed in an informal and expeditious manner and be terminated within one (1) day.

When will Decision be issued in Small Claims Cases?

After the hearing, the court shall render its decision on the same day, based on the facts established by the evidence. The decision shall immediately be entered by Clerk of Court in the court docket for civil cases and a copy thereof forthwith served on the parties.

The decision shall be final and unappealable.

How to execute Small Claims Cases?

If the decision is rendered in favor of the plaintiff, execution shall issue upon a motion.

Finally, under the Rule of Procedure for Small Claims Cases, the Clerk of Court or other court personnel shall provide such assistance as may be requested by a plaintiff or a defendant regarding the availability of forms and other information about the coverage, requirements as well as procedure for small claims cases.