Sponsored Links
Advertisement
Home
News
What Are The Reasons To File Annulment and What are the Process in the Philippines?
Prev Article Next Article 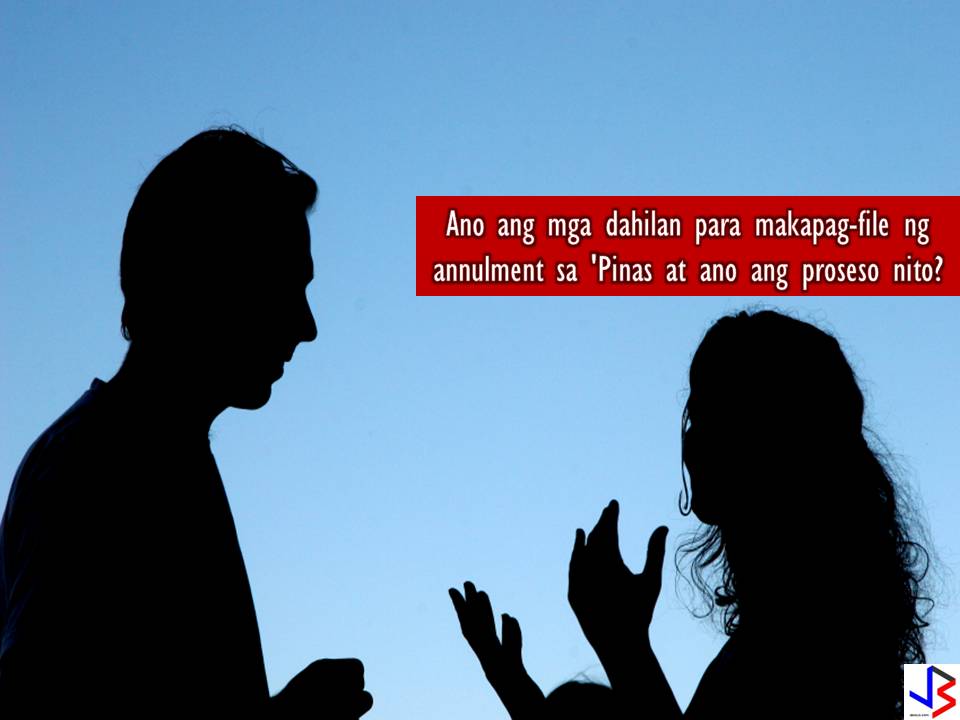 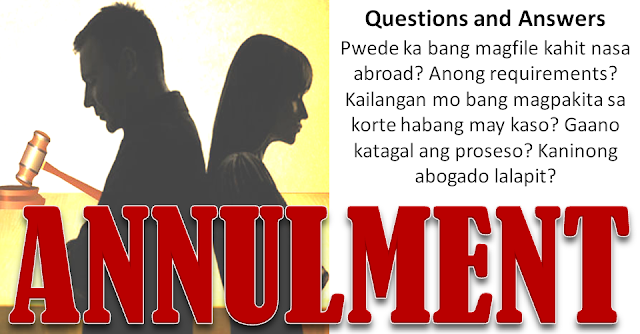 Q: What is annulment or nullity of marriage?L&B Law Office: Annulment is when the marriage is valid from the very beginning but can be annulled on various grounds. This is the term commonly used by Filipino layman but it is not commonly used by Filipino lawyers because it is more difficult to prove and in most cases, the circumstance of the married person does not fall in this category. Art. 45, of the Family Code provides the grounds for Annulment of Marriage.Declaration of Nullity on the other hand, states that the marriage is void or did not even legally exist in the first place. A Filipino or Filipina can marry again once there is a final judgment from the court that declares the marriage as null and void from the very beginning. The case that will be filed is what we call “petition to declare the marriage as null and void” and commonly called as “petition for nullity of marriage”. Hence, for the purposes of remarriage, a void marriage must be declared and there must be a Judicial Declaration of Absolute Nullity of a prior subsisting marriage before contracting another.  Otherwise, you commit bigamy. The marriage is null and void due to the absence of one or more of the essential or formal requisites of marriage as stated in Art. 2 and 3 of the Family Code. But what is applicable in most cases is Art. 36 of the Family Code which states that “A marriage contracted by any party who, at the time of the celebration, was psychologically incapacitated to comply with the essential marital obligations of marriage, shall likewise be void even if such incapacity becomes manifest only after its solemnization.” Most petitions for nullity of marriage are based on psychological incapacity of the other spouse. Q: What is psychological incapacity? L&B Law Office: This psychological incapacity is not necessarily insanity but it means that the other spouse has certain dysfunction, or psychological trait or make up which prevents the person to comply the obligations of marriage. It is so encompassing and maybe, general that gives lawyers and litigants a leeway on how to prove the case. But there are already various Supreme Cases that will guide the practicing lawyer and litigants of whether their case will fall in this category.

Q: Can I file a petition for nullity of marriage even while I am abroad?

L&B Law Office: Yes, you can file a petition for nullity of marriage even while you are abroad. What is required is for you to have the verification of your petition and your affidavit notarized before the nearest Philippine Embassy or Consulate in the country where you are residing or working.

YOU WANT HELP FROM LAWYERS TO START A CASE?

Please note that L&B Law Office is based in Cebu and in rare instances they can cater to other areas within Visayas. They don’t handle cases in Metro Manila and Luzon.

Affidavit of the petitioner

Verification of the petitioner w/ Cedula

Q: How long does it take for the proceedings to be completed? L&B Law Office: Based on the cases we have handled in Cebu City, if it is an uncontested case, meaning the other party will not oppose your petition for nullity of marriage, it will take an average of a year or more for a decision to be rendered.This is because the caseload of the courts, the availability of the prosecutor, judge and court personnel as well as the availability of the petitioner and the psychologist have to be considered. The time frame may vary for other places like Manila or Davao.

Q: How many times do I need to be personally present at the proceedings? L&B Law Office: You will need to personally appear at least three times.The first will be before the city or provincial prosecutor during the investigation for collusion between the parties.The second will be during the pre-trial stage. If you have executed a special power of attorney in favor of your lawyer authorizing him/her to appear in your behalf for the pre-trial, then you need not attend the pre-trial stage. This is usually allowed if the petitioner is working abroad. The third time is when you will be presented before the court to give your testimony about your marriage and your relations with your spouse. Q: Can I file the petition for nullity of marriage without the consent of the other spouse? L&B Law Office: Yes, you do not need to get the consent or the signature of the other party. As a rule, parties are not allowed to come to an agreement about the filing of the petition. That is why the Office of the Solicitor General, through the prosecutors, conduct an investigation for collusion, in order to determine whether or not the parties have colluded with each other in filing the petition or are involved in fabricating evidence.

Q: How much is the amount of the whole Annulment process?

QUESTIONS ABOVE AND OVERVIEW BELOW WAS TAKEN FROM THE LEPITEN AND BOJOS LAW OFFICE.  Reposted with permission.

See all overview of the process here

This is an overview of the procedure in the filing of civil cases involving annulment of marriage or declaring its nullity due to psychological incapacity that is not contested by the other spouse. This is a general outline and there may be instances that these steps will not be followed. This is prepared by the Law Office to guide clients so that they may be able to follow their case.

1. The client goes to the lawyer and presents his/her case. Please see Law Office checklist if you have all the requirements. After conferring with the lawyer and submission of all of the requirements, the lawyer will prepare the complaint.
Note: At this stage, it is advisable to secure the services of an expert witness (doctor, psychologist) who can testify on the psychological incapacity of the respondent. It is also advisable that the executive summary of the report of the expert witness form part of the complaint.

2. The compliant is filed before the Central Office of the Regional Trial Court. Raffling of cases is done every Monday of the week. Cases involving annulment and all other cases related to family matters will be raffled only to the designated Family Courts. This will take about a week.

4. The Court will issue an order requiring the plaintiff to submit copies of the complaint to Office of the Solicitor General and the prosecutor assigned.

This is based on Section 3(e), Rule 9 of the 1997 Rules of Civil Procedure in relation to Article 48 of the Family Code.

6. The report of the investigation of the prosecutor should be submitted ten (10) days after the 20-day period.

8. Hearing – this is the time when plaintiff will present his/her evidence (real, testimonial and documentary evidence) The number of witnesses will depend on the case, but usually, two to three witnesses will be enough, if the case is not contested (meaning, the respondent will not object). The witnesses will be the plaintiff herself/himself, the expert witness and one collaborating witness.

A. Presentation of the Plaintiff herself/himself (about one hour)

Direct examination of the plaintiff by her counsel

Cross-examination of the State

Redirect examination by the plaintiff’s counsel (if necessary)

B. Presentation of the psychologist or psychiatrist (about one hour)

Direct examination by the counsel

Cross-examination of the State

Redirect examination by the counsel (if necessary)

Re-cross-examination by the State (if necessary)

Note: The same procedure applies for every witness presented. While the plaintiff is presented, marking of exhibits will be done.

Presentation of two witnesses may be done in two to three months time from the pre-trial stage, depending on the availability of the court’s calendar.

D. Comments/Objections to the Formal Exhibits by the State Prosecutor – The prosecutor is given an opportunity to comment or object to the offer of exhibits. (10-15 days from receipt of the Formal Offer of Exhibits)

9. An Order will be issued directing the Office of the Solicitor General to issue a Certification briefly stating its reasons for its agreement or its objection to the petition within 30 days from the receipt of the order. This is in accordance with the decided case of the Supreme Court, Rep. Vs. Molina GR No. 108763 Feb. 13, 1997.

Likewise, the plaintiff will be directed to submit all exhibits and transcribed stenographic notes (TSN) to the Office of the Solicitor General within 7-15 days from receipt of the order.

10. The Court will then issue an order that the case is submitted for resolution. The decision may be released 30-90 days after the said order is issued.

This kind of case may be finished from a year or more  depending on various factors like the complexity of the case, availability of the court, witnesses and documentary evidence.

SEE ALSO: CIVIL ANNULMENT, HOW MUCH IS THE COST?