Sponsored Links
Advertisement
Home
Uncategorized
LOOK: 6 of the Most Wanted Criminals in the Philippine History!
Prev Article Next Article
The Philippines during the 60’s as they say was a hellish place. Because the government was prioritizing the country’s recovery from the foreign occupation, there is less attention in fixing the law and justice system. This has given notorious criminals, gang lords and public enemies an opportunity to proliferate.
Although these criminals are known for being ‘fearless mobsters bred by the underworld’, many people are still unaware of their stories. Here is a short list of Philippines’ most legendary tough guys.
1.) ASIONG SALONGA a.k.a HARI NG TONDO
-Asiong is Manila’s most feared criminal who controlled Tondo for several years. Although he had a notorious career of robbery, murder, extortion and other crimes, he was loved, respected and idolized by many of his neighbors. It is because Asiong was believed to be sharing his prosperity among the poor people of Tondo. Asiong was also reported to have walked the streets of Manila freely because of the politicans and police officials who were protecting him for their own interests. 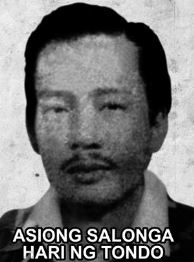 Asiong’s legendary life ended quickly at the age of 27 when he was shot dead in a drinking session with his gang on October 1951. His life was told in a 2011 documentary film, ‘The Manila Kingpin’, starring Jeorge ‘E.R’ Estregan.
2.) ARTURO PORCUNA a.k.a BOY GOLDEN
-Boy Golden was among the toughest gang leaders of Manila in the early 60’s. He was a prominent gangster who proliferate violence among feuding gang groups. He is considered as one of the most wanted criminals of the Philippines back in his time. 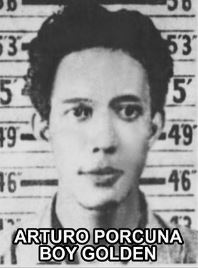 He met his bloody death in the early morning of December 24th, 1963. He was shot dead by a group of police while at their house with two new members of his gang. The news about his death flourished Manila and has circulated in different print media. His life was told to life in a documentary film released in 2013, titled ‘ Boy Golden: Shoot To Kill, the Arturo Porcuna Story starring Jeorge ‘E.R’ Estregan and KC Concepcion.
3.) BENJAMIN GARCIA a.k.a BEN TUMBLING
-Ben Tumbling acquired his nickname because he was reported to be a former stuntman who turned into a notorious police hater. He was known to be a police assassin who murdered 7 police officers in just a month.
His acrobatic skills were reported to have helped him get away from police arrest. His police hatred was believed to have been rooted from experiencing severe police brutality where his “ head was hit hard by a chair, dunked in a toilet bowl and his genitals electrocuted”. 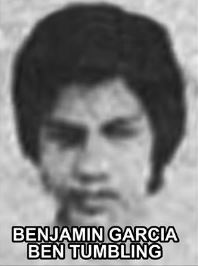 Moreover, what forced him to hate police more was when his young wife was raped.  Ben Tumbling was once Malabon’s most wanted criminal. Although he had a notorious life, Ben was adored by his neighbors because of his generosity especially to the people in need. He gave them cash and gifts.
He was assassinated in an ambush at the young age of 23. His assassination was allegedly led by Intelligence Chief Vicente Vinarao. His life was portrayed in a 2012 film, ‘Alyas Ben Tumbling’.
4.) MARCILA AMA PEREZ a.k.a BABY AMA
-Baby Ama’s criminal life started when he stole money to fund a friend’s education. He was sent to Bilibid Prison to serve his sentence. However because of his youthful look, he was reported to have experienced severe torture from his fellow inmates in Muntinlupa.
He was strong enough to survive all of the physical assault he received while detained at the prison. Baby Ama lost control of himself when he learned that his pregnant wife committed suicide after a prison guard allegedly raped her. 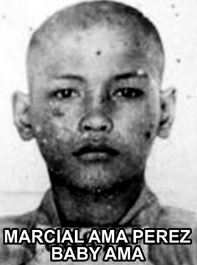 After the incident, Baby Ama became a hitman inside the prison who murdered some rival inmates. He was also known to have organized the biggest and deadliest riot in Bilibid where 9 prisoners were murdered, including one who was beheaded.
Baby Ama faced his death when he was executed by electric chair. His life was portrayed by action star Rudy Fernandez in the 1976 film, ‘Bitayin si Baby Ama’.
5.) LEONARDO MENECIO a.k.a NARDONG PUTIK
-Nardo was a notorious criminal hailed from Kawit, Cavite. He was known for having an amulet that, some believe, protected him which was why he was able to get away from police arrest. 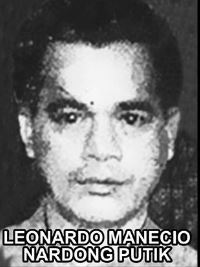 He was also tagged as the Robin Hood of Cavite because he shared all his earnings from his criminal activities to his neighborhood. In addition, Nardo is known for several crimes most of which include his involvement in the assassination and murder of several political figures in the 60’s.
He was also known for gunning down NBI agents. He died in an ambush allegedly conducted by NBI agent Epimaco Velasco. It was reported that the police authorities recovered 60 bullets from his body before he died. His life was portrayed in the 1972 action film, ‘Nardong Putik Kilabot ng Cavite’.
6.) WARLITO TOLEDO a.k.a WAWAY
-Waway is feared in Cebu because of his rape and murder cases. He was believed to have raped and murdered 40 women in a single day. He faced several criminal charges but none of them were pursued in court. No women appeared to complain against him.
Although he had numerous criminal charges, Waway was able to get away from the police. He remained at large, posters even with his name and face spread across the island of Cebu to warn minors. 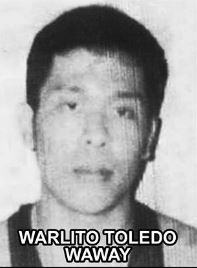 It was believed that his own wife was raped and murdered and so it prompted him to avenge her death in his own sick twisted brand of justice. Until now, no one has given any information about his notorious criminal.
What can you say about these hoodlums? Do you think there are people who are like them until today? Tell us what you think in the comments section below.
Prev Article Next Article